“All life on earth has evolved under a rhythmically changing cycle of light and darkness, and organisms from single-celled bacteria up to man possess an internal representation of time. These 24 hour cycles, termed circadian rhythms, persist in the absence of

external cues, and provide a means of anticipating changes in the environment rather than passively responding to them. In mammals, including man, light provides the critical input to the circadian system, synchronising the body clock to prevailing conditions.” (248)—RUSSELL FOSTER, Ph.D., F.R.S., C.B.E., Chair of Circadian Neuroscience, Head of Nuffield Laboratory of Ophthalmology, Oxford University [circadian: circa = about; die = day].

“[Y]oung people have special needs during adolescent development that are related directly to their intrinsic sleep cycles.” (6) Adolescence commences at puberty’s onset; (2) i.e., when children attain Tanner stage 2 (sexual maturation rating). (249, Stang & Story, Adolescent Growth and Development, publish. in, Guidelines for Adolescent Nutrition Services (Stang & Story, edits., Univ. Minn. 2005) p. 1.) The normal age range of pubertal onset is between 8 and 13 years in girls and between 9 years 6 months and 13 years, 6 months in boys. (249) ”The timing and tempo of puberty vary widely, even among healthy children.” (250)

While the end of puberty is defined as the point of cessation of bone growth, the end of adolescence is “defined less clearly, by a mixture of physical, psychological, social, and mental measures. One conspicuous property of adolescence is the apparently unsaturable capacity to stay up late and to sleep in.” (250.3) Individuals reach a maximum in their “‘lateness’” at around the age of 20. (250.3) At about 19.5 years in girls and at about 20.9 years in boys, there is an “abrupt change in the timing of sleep[,]” generally accepted as the “first biological marker of the end of adolescence.” (250.3, see ns. 7, 103, 250.4.)

Although sleep/wake patterns have long been known to delay in adolescents, behavioral factors (e.g., jobs, social diversions, scholastic obligations) were assumed to be entirely responsible. (21, 192) In 1913, for example, Stanford Psychology Department Chair Lewis Terman and his co-author, Adele Hocking, noted a shift from “vesperal” to “matinal” sleeping during adolescence, attributing the change to increasing homework. (250.7) In the 1970s, researchers recognized that sleep patterns “change fundamentally at the transition to adolescence.” (5)

“Growing evidence supports the conjecture that endogenous circadian period and light sensitivity of the circadian system are altered during puberty in humans and animals. Such changes could explain the development of delayed sleep phase during puberty.” (103)

The sleep pressure rate, or homeostatic drive—the biological trigger that causes sleepiness—slows down in adolescence. (26, 103) “Homeostasis relates to the neurobiological need to sleep; the longer the period of wakefulness, the more pressure builds for sleep and the more difficult it is to resist[.]” (222) Adolescents develop a resistance to sleep pressure that permits them to stay up later. (103) At the same time, their circadian phase becomes relatively delayed, which provides them with a drive to stay awake later in the evening and to sleep later in the morning. (103) The magnitude of the delay is greater on non–school days. (1.5, 20, 21, 65, 147, 193) Additionally, rising time on non–school days gets later as adolescence progresses. (1.5, 21, 183.5)

The preferred sleep onset time for most adolescents is 11 p.m. or later. (2, 7, 8, 9, 54) In adults, by contrast, the ideal sleep onset time may range from 8 p.m. to midnight. (269) Bedtime gets later on school and non–school days with increasing adolescent age. (21, 65, 193) The circadian system and melatonin, a sleep-inducing hormone, direct a sleep cycle in teens which operates from approximately 11 p.m. to 8 a.m., or later. (2, 3, 6, 7, 8, 9, 54) The pubertal stage correlates with the “circadian phase marker” such that more mature children show a “later phase of melatonin secretion offset[]” (Carskadon, Maturation of processes regulating sleep in adolescents, publish. in, Sleep in Children: Developmental Changes in Sleep Patterns, supra, p. 100 [the presence of melatonin may be measured in salivary levels], n. omitted; see also, n. 21), generally leaving students in the upper grades the most sleep-deprived. (67, 107, 145)

While some individuals may be able to fall asleep earlier than 11 p.m. (Smolensky & Lamberg, The Body Clock: Guide to Better Health (Henry Holt & Co., 2000) [melatonin secretion may occur by 10:30 p.m. in older adolescents and by about 9:30 p.m. in younger

“The teenage body is nocturnal[.]” (268) According to Stanford sleep expert Dr. William Dement, adolescents’ “biological rhythms are set in such a way that they really can’t wake up earlier. It’s like telling a person they have to jump eight feet. They just can’t.” (184)

“Many parents and teachers become frustrated that adolescents seem to create their own problem of not getting enough sleep by choosing a late bedtime, despite their complaints of sleepiness in the morning. However, there are multiple factors that contribute to later bedtimes, and it is increasingly clear that adolescents stay awake later largely for biological, not social, reasons. As with adults, the physiological factor that most powerfully regulates the timing of waking and sleeping in adolescents is the circadian rhythm, a hard-wired ‘clock’ in the suprachiasmatic nucleus of the brain.” (2) 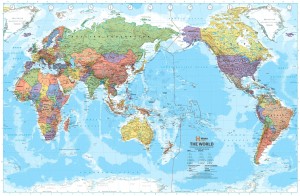 Phase delayed sleep/wake patterns prevail among adolescents globally. (253, 254, 255, 256, 257, 258, 259) “[A] delay in the timing of sleep during the second decade of life has been observed in over 16 countries on 6 continents, in cultures ranging from pre-industrial to modern.” (103) For some teens, “the biological urge to stay up late continues into their forties.” (Terman & McMahan, Chronotherapy: Resetting Your Inner Clock to Boost Mood, Alertness, and Quality Sleep, supra, p. 199.) Most children and adolescents, however, sleep increasingly later until the age of approximately 20, when there is an “abrupt shift in sleep schedules” and “mid-point times” become increasingly earlier again. (250.3, 265) Until then, scientists have repeatedly observed that adhering to Poor Richard’s judgment—“ ‘early to bed, early to rise’—may be difficult in the presence of a biologically driven phase preference.” (1, 7, 32)

Individuals are inherently “larks” or “owls” who naturally prefer earlier or later daily schedules; i.e., morningness or eveningness chronotypes. (260, 261) Females tend to be more ‘morning type’ due to a tendency to have a shorter circadian period. (266)

“Chronotype refers to when an individual’s endogenous circadian clock synchronises (entrains) to the 24 h day. When shielded from environmental time cues, i.e. cycles of light and darkness, circadian clocks ‘run free’, with a period of about one day (hence ‘circa-dian’). In nature, they are entrained to the earth’s 24 h light–dark cycle, with individual clocks entraining 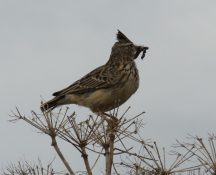 differently —some very late (‘owls’), others very early (‘larks’), and the majority in between. The chronotype is predominantly defined via behavior, e.g. activity onset in animals which strongly correlates with sleep offset.” (250.3)

Although phase delay generally shifts adolescents to the owl’s schedule, (260) individuals retain biological preferences for morning or evening activities. (261) “For around 40% of teens, this natural tendency toward an eveningness chronotype is so severe that it is practically impossible for them to fall asleep much before midnight even under the most supportive of parental/familial conditions and bedtime routines[.]” (250.1)

There may be variation within chronotypes, placing some at mid-range, others at extremes. (262) Extreme “owls” may fall asleep when extreme “larks” awaken. (263) Mid-range types may slightly favor morning or evening activities, but can occasionally manage either. (Smolensky & Lamberg, The Body Clock: Guide to Better Health, supra, pp. 40-41, 55 [referring to mid-range types as “hummingbirds”].)

“Our daily life is organized by three different clocks: a solar clock, providing light and warmer temperatures during the day; a social clock, which we see or hear first thing on a working day; and a biological clock, which we sense most vividly when jet lagged, during shift work, or when adjusting to daylight savings time. When shielded from the solar and the social clock (constant conditions), the biological clock ‘runs free.’ In real life, however, circadian clocks are usually synchronized (entrained) to the 24 h of the solar clock. The major environmental signal for entrainment (zeitgeber) is light that, in mammals, can reach the biological clock only through the eyes[.]” (263, citations omitted.)

“Long after the initial discovery of circadian rhythms, it was assumed that human beings had evolved to the point where circadian rhythms were no longer impacted by the light-dark environment. The finding by Lewy et al. that bright white light delivered to the human eye at night could inhibit melatonin production—and even shift the melatonin production rhythm—demonstrated that this earlier belief about lighting was false.” (278) (The totally blind generally have circadian rhythms that are “free-running” — i.e., not entrained to environmental time cues, oscillating on a cycle slightly longer than 24 hours.) (279)

Nearly all adolescents in the U.S. have at least one electronic item such as a television, computer, telephone, or music device in their bedrooms. (25, 105) The brightness of a television or computer screen may interfere with melatonin release, because release occurs only under dark conditions. (105) In turn, regulation of the sleep-wake cycle may be disturbed. (105) A 2014 survey of 9,089 high school students in three states found that students with either a phone or computer in their bedrooms were less likely to capture eight hours of sleep than students without these items in their bedrooms. (309) Electronic device multitasking also appears to be a good predictor of diminished sleep. (105) Video gaming may be particularly disruptive to adolescent sleep. (108)

As little as five hours exposure to normal levels of indoor lighting, and not just very bright light, can reset the human biological clock, a finding which indicates that many people in industrialized countries may be constantly sleep deprived and in a permanent state of jet lag. (280) A study of Brazilian adolescents living without electricity showed a delay in sleep, however, those living in nearby electrified homes delayed sleep to a greater degree and slept less. (Carskadon, Maturation of processes regulating sleep in adolescents, publish. in, Sleep in Children: Developmental Changes in Sleep Patterns, supra, p. 96.)

Although light treatments have served to modify circadian timing in some populations, a 2005 study reported early morning light treatments did not change adolescent sleep/wake cycles or improve daytime performance during weekdays. (6) “Natural circadian patterns are very resistant to change.” (Wahlstrom, Accommodating the Sleep Patterns of Adolescents Within Current Educational Structures: An Uncharted Path, publish. in, Adolescent Sleep Patterns, Biological, Social, and Psychological Influences, supra, p. 173.) By contrast, carefully controlling light exposure, including wearing eyeshades to exclude evening light, has been successful in modifying adolescent circadian timing. (5, 8) However, this approach may be less than practical for most teenagers. 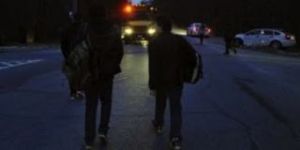 “ ‘As teenagers spend more time indoors, they miss out on essential morning light needed to stimulate the body’s 24-hour biological system, which regulates the sleep/wake cycle[.]’ [¶] The problem is that today’s middle and high schools have rigid schedules requiring teenagers to be in school very early in the morning.  These students are likely to miss the morning light because they are often traveling to and arriving at school before the sun is up or as it’s just rising.  ’This disrupts the connection between daily biological rhythms, called circadian rhythms, and the earth’s natural 24-hour light/dark cycle[.]’ ” (282)

In addition, Figueiro contends schools are unlikely to provide adequate electric light or daylight to stimulate this biological or circadian system, which regulates body temperature, alertness, appetite, hormones and sleep patterns. (282) Our biological system responds to light much differently than our visual system. (282) It is much more sensitive to blue light. (282) Therefore, having enough light in the classroom to read and study does not guarantee sufficient light to stimulate our biological system. (282)

The situation in schools can be changed rapidly by the conscious delivery of daylight (e.g., via large windows/skylights), (283) which is saturated with blue light. (282) “We hypothesize that if light has an impact on students’ performance and well-being, it is by promoting their circadian entrainment [synchronization] to the solar day, especially in winter months. Those who are not exposed to enough daylight will experience a more pronounced delayed circadian phase, which will result in sleep problems and more severe stress.” (284, 285) An earlier study found that on average, each additional hour spent outdoors per day corresponds to an advance in sleep of almost 30 minutes. (263)