“persistent feelings of sadness, anxiety, hopelessness and disinterest in things that were once enjoyed[.]” (381) Excessive irritability, moodiness, sleep and appetite changes may signal a vulnerability to depression. (380)

“[D]epression is not only a symptom of sleep deprivation but can also be a cause.” (382) Scientists refer to this as a “bidirectional” relationship (Dobson & Dozois, Risk Factors in Depression (Academic Press 2008) p. 109), or “bidirectional causal pathway.” (23)

“Adolescents who present with depression display high rates of sleep disturbance and those who present with complaints of poor sleep display high rates of depression. … This may create a perpetual cycle, where lack of sleep leads to feelings of fatigue and apathy at school, impaired academic and social functioning, reduced levels of motivation, and impaired ability to regulate mood and emotional responses.” (119)

Anxiety, an abnormal or overwhelming sense of apprehension and fear, has a bidirectional relationship with insomnia. (383) Insomnia, with all its complications, is “extraordinarily common” in children and adolescents, with an estimated prevalence of 20–30%. (384) One-fourth to one-half of adolescents report experiencing insomnia for periods of 1 to 4 years. (386) Individuals with anxiety disorders and poor sleep experience

A 2004 study of 2,259 students, aged 11 to 14 years, found that students who obtained less sleep in sixth grade exhibited lower initial self-esteem and higher initial levels of depressive symptoms. (23) Similarly, students who obtained less sleep over time reported heightened levels of depressive symptoms and decreased self-esteem. (23) Depressed children often report disturbed sleep despite normal architecture measured by electroencephalography. (134) Adolescents who are anxious, depressed, or feel less healthy “may in fact, need more sleep than those with better psychological functioning. The challenges of getting through an ordinary day may require increased energy for these adolescents.” (134)

Many children and adolescents with depression suffer from sleep problems such as insomnia or hypersomnia (excessive sleepiness) or both. (381) A 2005 study found that people with insomnia had greater depression and anxiety levels than people not having insomnia and were 9.82 and 17.35 times as likely to have clinically signiﬁcant depression and anxiety, respectively. (388) A 2007 study of 553 children (mean age 11.7 years) found that children experiencing episodes of major depression with diagnoses of both insomnia and hypersomnia had a longer history of illness, were more severely depressed, and were more likely to have anhedonia (an inability to feel pleasure), weight loss, psychomotor retardation, and fatigue than were those with either insomnia or hypersomnia. (389)

The 2006 National Sleep Foundation Poll found a strong association between negative moods and more pronounced sleep related issues. (109) Among those adolescents saying they were unhappy or tense most often, 73% felt they were not getting enough sleep at night and 59% felt too sleepy during the day. (109) Teens who slept more than nine or more hours on school nights reported much more positive mood than their peers. (109) Those adolescents who most often felt unhappy or sad than their peers were also more likely to fall asleep in school, have difficulty falling asleep at night and think they have a sleep problem. (109) In addition, they have more trouble getting along with their family. (109) 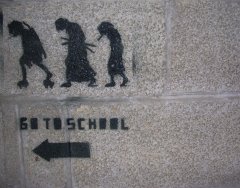 “Depressed adolescents frequently have difficulty falling asleep, are unable to get up or refuse to go to school, sleep until late in the day, complain of extreme daytime fatigue, and, over time, shift to increasingly more delayed sleep-wake schedules.” (220) “[S]tudents who are anxious, angry, or depressed don’t learn; people caught in these states do not take in information efficiently or deal with it well.” (390)

A 2014 survey of 9,089 high school students found that teens reporting less than 8 hours of sleep had significantly more symptoms of depression than peers getting 8 or more hours per school night. (309) Reports of depression have been shown to decline in schools delaying start times to 8:25 a.m., (107) or later, (3, 37, 41, 47, 309) a point Judith Owens, Director of the Center for Pediatric Sleep Disorders, regards as “particularly noteworthy[,]” (41) given the association between depression and suicidal ideation among adolescents. (41, 380, 391, 392)